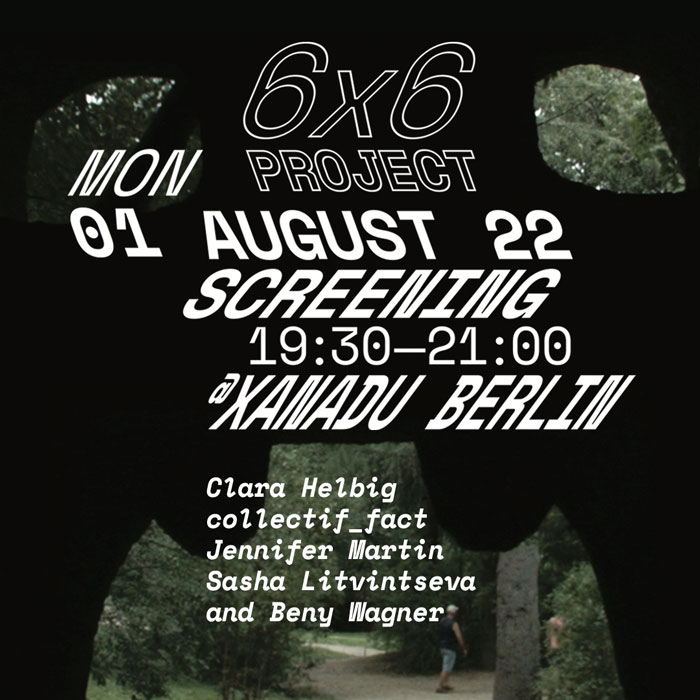 An introduction into Project Spaces as Micro-Cinemas with 6x6 Project, Xanadu, Anorak and Videoart at Midnight.

On Monday, 1 August from 18:00 until 00:30, as part of Project Space Festival, several Berlin-based platforms will present moving image programs that represent their own distinctive approaches to the problems and opportunities posed by attempts to present the medium outside of standard institutionalized contexts.

In this speculative fiction, all the world’s photographs have suddenly turned into the objects they represent. The video depicts a vertiginous architecture, so devastating that it created new uncontrollable borders and isolated people. Piles of selfies, cats, and meals are scattered everywhere. Text messages evoke a new society living with limitations and suffering from media saturation, sensory overload, and crushing ecological impact. A world where images have taken over, invading and transforming space. They become the only reality that is still visible, as the whole world is turning inwards.

Two men share their experiences of working in the food industrial complex, challenging our traditional ideas of food production. Dealing with a patriarchal paradigm in crisis, disjointed offers a performative space to heal from trauma: work movements become a way of embodying the inaccessible.

‘Meanwhile on Set…’ centres conditions of acting for British black and black bi-/multi-racial actresses. Actors veer from the filmmaking process, question the context of their surroundings, breakdown, and misbehave like viruses disrupting a system.

‘A Demonstration’ is a monster film with no monsters. Inspired by the existence of taxonomies of monsters at the heart of early modern European science, the film explores and reinterprets a way of seeing the natural world that is almost impossible to imagine from today’s vantage point. Early Modern naturalists were guided by a logic in which truths were discovered through visual analogy. The word ‘monster’ comes from the latin ‘monstrare’, meaning to show, to reveal, to demonstrate. ‘A Demonstration’ picks up on these themes in a poetic exploration of the boundaries of sight and the metamorphosis of form.