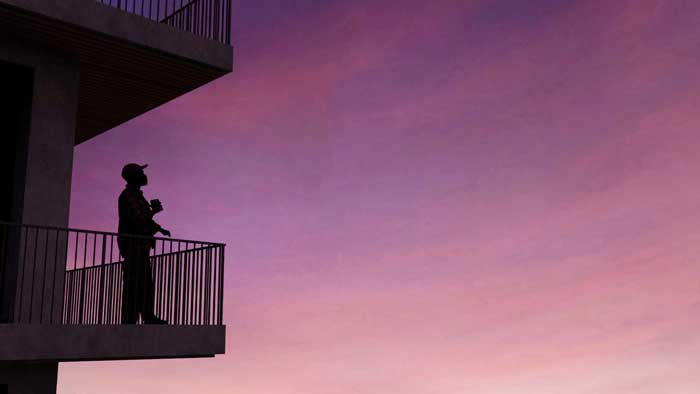 I spent the early part of my life beside the sea in Cornwall, South West England. I went to Falmouth School of Art then then to Newcastle to study a Fine Art BA in sculpture. After art college I travelled and lived in many cities around the world. In 2002 I moved to London, mainly because of the brilliant access to art it offers. I am based in East London, which I love because of its diversity and the numerous artists who are in my life. Over the years I have watched the whole area change particularly since the London 2012 Olympics. Whole neighbourhoods have been crushed to dust and new ‘villages’ built. For many years now I have been witness to these changes.

Banality, urban loneliness, the everyday, twilight and the way light shifts from day to night. I’m also interested in the way cities change and the politics of public and private space. Living in East London I am surrounded by new neighbourhoods where luxury flats (that are not so luxury) are marketed and sold. I have favourite locations that I return to and wait for something- a moment that interests me…this could be as simple as a lamp light coming on or the silhouette of a figure backlit in a window.

Often through a collection of observations that I film. These recordings form into sequences and become longer works or are used as loops in sculptural works. I have created my own library of observations and have particular favourite recordings that reappear in many works. Early on in the process I will search for the right kinds of sounds to accompany the visual, audio is very important to me. I’m not musically trained have a keen ear for what is right. I’m also good at internet searches and sourcing sound that I remix and reappropriate for my own use. I’m naturally curious and like to try out new ways of working but it’s reassuring for me to return to the same piece of footage and rework it into something new. Recurring locations also allows me to fine tune my observations. I might return to a particular place up to ten times maybe more to get a single shot that I think I can use.

It’s been very busy recently. I’ve been working alongside Sophie Hill (Nunnery Gallery Director) on the International exhibition of moving image and performance, ‘Visions in the Nunnery’, Nunnery Gallery. We showcase many brilliant artists across three programmes, each of these spans 3-4 weeks. The exhibition takes about 6 months every two years to put together. I’ve always organised exhibitions and activity and see it as going hand in hand with my own artist’s life. I’m a big believer in creating networks and being proactive. I’m grateful for the inclusion on this artist led platform, 6x6 project. I’ve already started to watch the films and have discovered so many artists who before where unknown to me. Also good to see some artists on 6x6 project that we have shown in Visions in the Nunnery too!

As far as my own personal work I am part of Visions P2 and will be showing a new work that I have been developing for quite a few months. The work in progress aptly named Chobham after the area in the Olympic Park where I have been filming people silhouetted on their balconies at twilight. It’s great to have a real physical gallery to be able to show work in, so I want to take full advantage of this particularly when so much content is now online.

Summer Break: 6x6 project will be back in September with Edition Nº 25. Sign up to the newsletter here to be notified! Dismiss