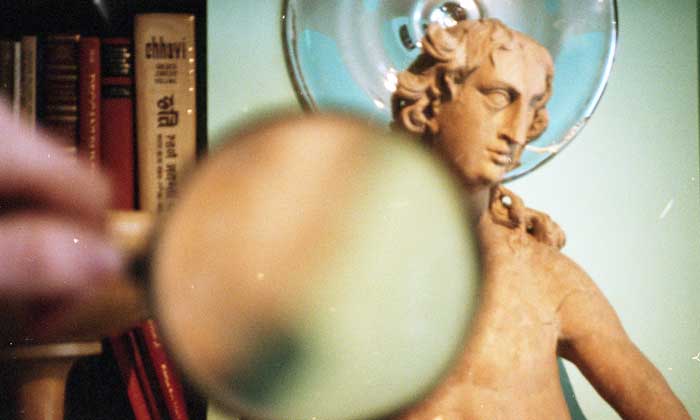 I was born in Newcastle upon Tyne in 1993. I initially began making and studying sculpture and then moved into video and film.

I find myself being more and more influenced by reading than anything else: a mix between fiction and autobiographical writing.

My work usually begins with a specific place: either one which I have visited physically or experienced in a removed capacity, such as in a film or a photograph. I initially build around either an image and / or an object from this location.

I am currently making a work that exists as both a film and as a performance called Interior (The Spectator). This work has come out of working for the then studio and now estate of the painter Howard Hodgkin. The first memory I have of Howard is from twelve years ago, when I was fifteen years old on an annual school trip to Tate Britain, where I saw his painting Clean Sheets. It is the only work I can recall from that trip. The painting is a lot bigger than I remember it, the composition and colours remain the same.

My next encounter would be nine years later when I began working at his home and studio in January 2017, at the same time Howard was in India painting. Whilst he was in India, giving past memories a physical form, I was in his home, archiving and itemising those that had already found a tangible existence. As I awaited his return home, I listened to interviews of him as I logged the thousands of analogue photographs in his library, directly beneath his studio. His voice in my ears and his still image in my hands.

Almost immediately on his return home, Howard Hodgkin died, aged eighty-four on March 9, 2017. The anticipation of meeting him is a feeling that still persists. Interior (The Spectator) is built up of hundreds of still images, all but two of which were taken by myself, accompanied by a narration of musings and thoughts. That said, it is not so much about Howard Hodgkin, but around ideas concerning personal and collective memory, around knowing those we have never met. At a time when so many of us follow or look into the lives of others, I find myself thinking about what identity means now and how an object or an image can represent this.

Summer Break: 6x6 project will be back in September with Edition Nº 29. Sign up to the newsletter here to be notified! Dismiss