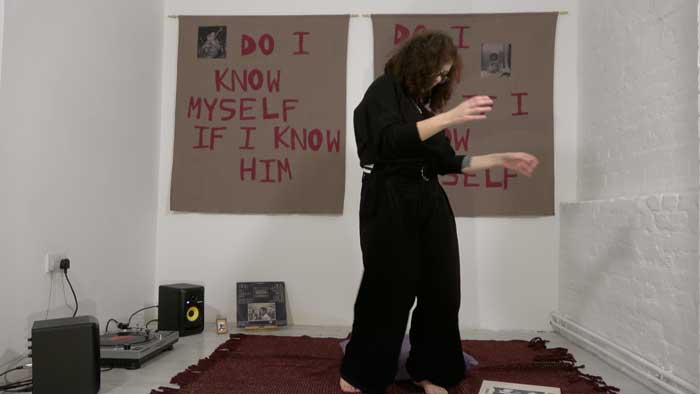 I have a background in Art History, which has given me a research-based underpinning to my practice. Initially, I began working as a curator and writer, focused on devising new languages around blackness and identity, and supporting underrepresented artists. At the end of 2020, I shifted my focus to sit across writing and art making, in part as a response to the worsening in an impairment I have had for most of my life. I use my experiences as a disabled, mixed race person of Black parentage to propel a personal interrogation through my work.

Primarily, I’m influenced by auteothnographic practices, and the potentials for the personal to provide cultural and contextual specificity to political and social structures. I was drawn to moving image as a medium, through a deep appreciation of moving image as a form of self-archiving, in the work of artists such as Rochelle White, Rabz Lansiquot, Evan Ifekoya, Larry Achiampong and Rehana Zaman. My hope is that by referencing my own experiences and background in my work, I can move away from what Saidiya Hartman terms ‘the violence of abstraction’; something I think is particularly important when considering race and disability.

I tend to have things floating around in my head, sparked by something I’ve seen or heard, or passing thoughts. I’ll often be noting these down in notebooks, as starting points or references for new works. The way my brain works means that once I’ve thought of something, if it holds any meaning or curiosity for me I won’t be able to get out of my head. Often, I will have been thinking of a work for months to years preceding doing anything with it. Then, when I have enough space and capacity to face it, I’ll start attempting to draw what’s in my head out into the physical world. I often find that as I’m in the process of making a work, I’ll have conversations with friends and peers which will provide new ways of seeing and understanding a work. When I was making An Echo For My Father, a conversation with my friend Joseph Bond helped me to consider that a visualisation of absence was interrelated with gaps and silences in both the image and audio. When I reached the stage of postproduction another friend, Jemma Desai, convinced me to take out the voiceover which was originally in the work and replace it with closed captions – lending itself more to an evocation of this silence. While I’m quite a solitary person, I often find conversations which occur in parallel to something I’m working on bring out new perspectives and threads. This process is also helpful in considering how works are never made in a vacuum, they are always influenced by the environments and contexts in which they are made. As a disabled person, I tend to work very gradually, taking regular breaks and building rest time in. Wherever possible, I try to bring slowness into my practice, as a reminder of Tina Campt’s theorising that slowness isn’t just a change in velocity, it also shifts what we give our attention to.

I’ve just moved into my first permanent artist studio space at Studio Voltaire, which will hopefully give me more time and physical space to make work. Until the end of the summer, I’m concluding my MA in Art History and writing my dissertation, which continues research I’ve been doing into institutional harm. Simultaneously, I’m undertaking writing projects, continuing to centre my research around disability, and beginning to think about fundraising to make the two follow up films to An Echo For My Father. The intention with the film series is for each subsequent film to expand out further, moving from the micro experience of absence to the macro cultural connections between Cape Town and London. As part of that work, I hope to take a research trip to South Africa, which would be my first time visiting the country, in order to document and archive the process of uncovering my paternal lineage.