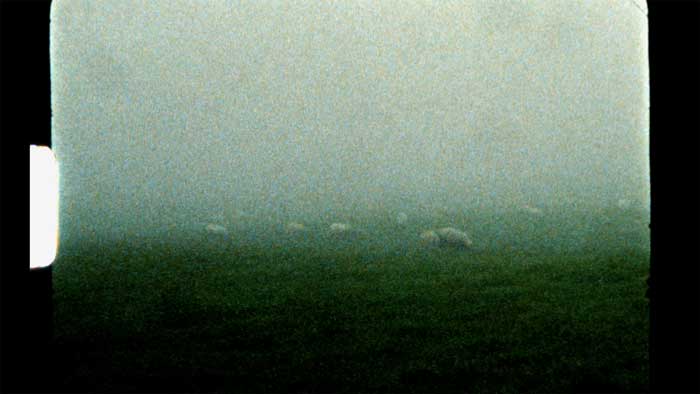 We are two humans that work as one artist, we have been working together for nine and a half years. Our collaboration began as a dialogue which within only a couple of weeks led to us starting work on a project called Savage Witches, a feature length film about the imagination, creative freedom and the possibilities of cinema as an art form. Savage Witches was the big bang of our life together, it’s when the artist Daniel & Clara was born, when our practice fused into a single entity and our path became clear. In that film can be found the seeds of every single project that we’ve made since.

We work with moving image, photography, letters and performance. Over the years our work has moved through several phases, highly impacted by where we were living and the tools we had available to us. For 6 years we lived in a small seaside town in Portugal in a dilapidated beach house where we grew our own food and kept chickens. This was an incredibly important and fruitful time for us, being in isolation enabled us to work without distraction, spending every day focused on our art and digging deeper into the workings of our imagination and creativity.

Last year we moved back to the UK and spent some wonderful months living in London, creating new work but also launching Moving Image Artists, an organisation dedicated to supporting and cultivating contemporary moving image art and experimental film. Through this we run a monthly event called the Moving Image Salon which is a space for experimental filmmakers and artists working with moving image to come together, share work and discuss their practice. This is now on hold due to the current pandemic but our online activities are still running and we have recently expanded to include the publication of an online magazine.

We are now living on Mersea Island on the Essex coast where we plan to stay until this surreal situation passes.

We are currently interested in the relationship between inner and outer experiences of place, particularly landscapes. Our work has always given preference to interior visions, we have spent a lot of time investigating the images from our dreams and the workings of the imagination, and using these investigations to inform our practice. More recently the shift has been from a solely inward gaze to more of a dialogue between these internal images and the places we are in, an engagement we can best describe as seeing with one eye open looking out and one eye closed looking in. Particularly we’ve been exploring how we project our psyche out onto landscapes and nature, and also how in turn the natural world and environments impact on our thoughts, imagination and inner states.

The two films included here on 6x6 project are a part of these investigations. INT. LANDSCAPES was one of our first works directly approaching these subjects. It was filmed while on a journey around southern Ireland in 2017, all sound and images were recorded on location but most of the film takes place in complete darkness. Through the use of sound recordings and fleeting images interrupting darkness we seek to step beyond both documentary and fiction to exist in a third form that is simultaneously neither and both.

The second film Revisiting was created in summer 2019 and is a part of a larger ongoing project in response to Avebury stone circle in Wiltshire. Avebury has become a significant place for us, one of the key zones on the map of our projected psyche, along with the Essex salt marshes, Dungeness and the rocky beaches and hills near Hastings. We first visited Avebury in 2017 while on a tour around the UK showing our films, during the tour we shot footage for a feature film called Notes From A Journey. Revisiting is about the experience of returning to a place of a significant experience and about how the various narrative threads of past and present collide continuously.

These places speak to us, they activate imaginative thought and through our artistic engagement with creating images of them we are able to draw something out from the depths of ourselves. Fundamentally we are interested in consciousness, the experience of being a human living in a body with a mind and being conscious of it. All our work is about exploring these dimensions and seeks to expand the possibilities of being human.

In order to be inspired we must create within ourselves the conditions for creativity and imagination to flourish. For us it is necessary to have a daily practice and a daily routine that keeps the doors to the imagination well oiled. The imagination is like a muscle and must be exercised to be at its strongest and most flexible. In addition to this one needs a craft, material forms which become containers for the imaginative material. Our work comes out of this daily discipline, the constant dialogue between us and within ourselves.

All works are born differently but there are some common stages and processes that reoccur. Being two means that the dialogue between us is continuous. The way our collaboration works is that we take no personal ownership over any ideas or activities, we both give everything we have to the projects and it then belongs to us both equally. We see ourselves as servants of creativity rather than as creator gods or masters, our duty is to listen to what creativity tells us and to follow its guidance.

We always have several projects happening at any given time and they feed into each other, we have learnt not to force things, when we find ourselves at a standstill with one project we simply move across to one of the others and work there for a while until the obstacle fades away. It took us a while to get to grips with this, to learn to step away rather than push through, but as soon as we began to take this approach everything flowed, we managed to achieve more and creative breakthroughs became more regular.

We have our ongoing Avebury project which so far consists of a feature film (Notes From A Journey), a shorter video work (Revisiting), several photo series and letters. We also have a book, installation and a performance in the pipeline but that is on hold at the moment for obvious reasons.

We also have an ongoing mail art project of letters which has currently become more important due to the fact that we are unable to see people in person, so we have been posting these out quite frequently. For us the internet is incredible but it is also important to continue to create something physical that can be touched, something we can send directly from our hands into the hands of the viewer.

An unexpected and exciting outcome of this enforced isolation is that we have finally started editing Plot Points, a feature film which we shot on the misty beaches of Portugal about two years ago but hadn’t had a chance to finish yet. We are currently using our time to focus on working through the hours of footage of that and slowly piecing it together.

The world has suddenly changed, it won’t quickly go back to normal after this and it would be very easy to get distracted and confused because it is such a turbulent and scary time but we need to all do what we can to stay safe and stay sane, find that part of ourselves which is constant and clear and stay connected to that. For us we can do this by spending time each day creating, some time outside, and some time dreaming.