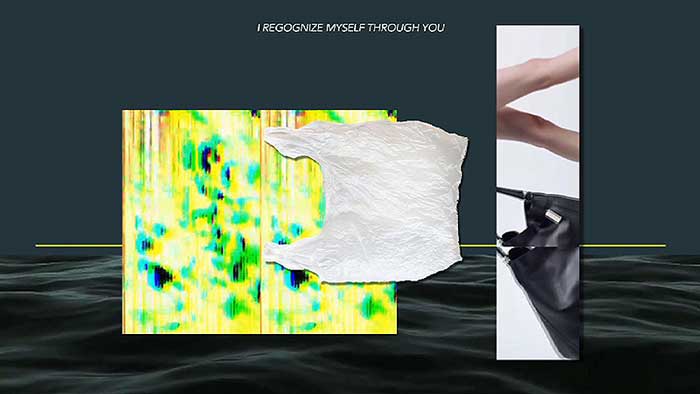 I grew up in Austria and studied Fine Art at CSM in London, in the class for new and time-based media. I attended art school quite late – at the end of my twenties – and before that I have moved around quite a bit between Vienna, Berlin and London. I started out with works of photography, collage and drawing, but I was drawn to the medium of the moving image quite quickly.

I am fascinated by systems of storytelling, although I am constantly sabotaging coherent narratives in my work. So I am often influenced by films or texts, that are experimenting with incoherence. The composition of my work is consistently formal, a consequence of my engagement with the minimalist concepts of structural film. Another big influence are theoretical texts by a wide range of writers, time and again I seem to return to Laura Mulvey or Giorgio Agamben.

I usually start with writing about and around the material I am collecting – images, texts, fragments, colours, typography, slogans, GIFs, extracts of films. This often culminates in lyrical texts, reminiscent of a sequence of slogans, circulating a particular theme. The text then slowly starts to interact with fragments of imagery.

I am working on a moving image work in collaboration with the writer Christina M. Landerl, based on a technique of Adalbert Stifter, who uses a sprawling and meandering description of landscapes to slowly approach the characters in his novels.

Another work in progress are short, GIF-like moving images, that depict fantastical and utopian machinery halls with 3D animated objects, reflecting on ideas around the apparatus, industrial production and machine labour.